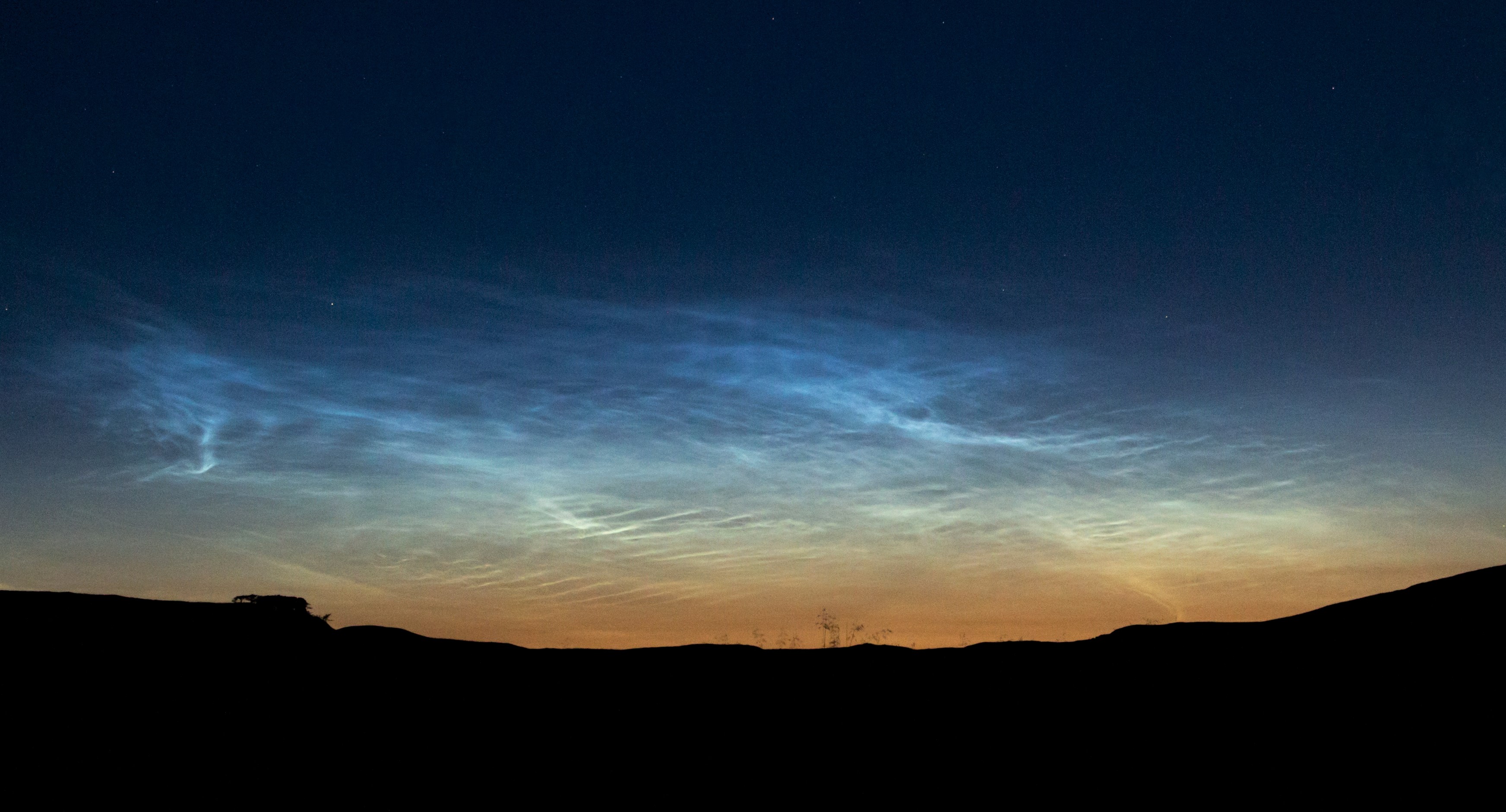 While there may be fewer stars visible in the lighter summer night skies, there’s a chance of seeing the beautiful electric blue glow of noctilucent clouds over the next couple of months.

Such is the Earth’s tilt that at the higher latitudes of the Arctic circle, the Sun does not drop below the horizon at all during the ‘night’.

Here in the UK, however, that angle of the summer Sun below the horizon, combined with our high latitude’s relative proximity to the cold air above the Arctic, gives rise to a rare and beautiful night sky phenomenon, noctilucent clouds.

These ‘clouds’ consist of tiny ice crystals high in our atmosphere (around 80 km or 50 miles) being under-lit by the Sun, even as it sits below the horizon to us on the ground. These ice crystals are at a temperature of around -130 degrees centigrade, are only visible at certain latitudes (50 – 70 degrees from the equator) and only appear in the northern hemisphere between May and August each year.

They appear to have a pale blue ‘glow’ (indeed the name noctilucent means ‘night-shining’ clouds) and while it is not uncommon to see them forming striking lines and patterns in the night sky, they do not limit the light from the stars beyond as normal clouds do.

For the best chance to see them, whether you’re waiting up purposefully hoping to catch a glimpse of them, or you just happen to wake up in the night over the next couple of months, look north (towards the lightest patch of the night sky), particularly an hour or two after sunset and before sunrise.

Meteors from the Eta-Aquarids shower can be seen throughout this month, but numbers are likely to peak on 5 – 6 May this year. You’re more likely to see the meteors if you can get away from bright sources of light, and give your eyes 15 – 20 minutes to adapt to the dark.

The meteors can appear anywhere across the night sky, and with the Moon not brightening the skies until around 3.30am on these nights, it may be possible to see up to 40 meteors an hour.

The meteors are small fragments from Comet Halley entering our atmosphere as Earth moves into the space through which the comet once travelled, and left a trail of debris. The fragments in this meteor shower are known for their speed, as they hit our atmosphere travelling at over 40 miles (65km) per second!

Comet Halley orbits the sun every 76 years, and is next due to return to the inner Solar System in 2061.

Astronomers often refer to spring as ‘galaxy season’, as the constellations visible at this time of year host a number of the larger galaxies that we can see ‘close’ to our own, the Milky Way.

Galaxies are like swirling islands of stars, and many of these are visible, albeit small and faint, through powerful binoculars or a small telescope, and you will be able to see more the further away from light polluted towns and cities you can get.

Because of the immense distance to these galaxies (even though we refer to these as ‘close’, those in the image above are between 20 and 35 million light years away), we cannot resolve individual stars within them, and so the light we see is the collective glow created by the hundreds of millions of stars that make up these galaxies.

The Moon and planets

The full Moon will appear on the edges of the constellation of Scorpius on 26 May. While other parts of the world will experience a lunar eclipse this month, sadly it is not visible from the UK.

The darker skies provided by the ‘new Moon’ (when the Moon is on the same side of the Earth as the Sun) around 11 May will aid anyone trying to spot those beautiful but faint galaxies. On the evening of 19 May, the 50% illuminated Moon will drift through the constellation of Leo, high in the south-west as it gets dark.

Planet hunters looking for Jupiter and Saturn can find the planets low in the south-eastern sky in the hour before sunrise. Early risers on 4 May can use the 45% illuminated Moon as a guide, as it forms a triangle with the two gas giants, sitting just underneath them.

Mercury and Venus will be visible in the western evening sky in the half-hour or so after sunset. Sharp-eyed observers may spot a tiny slice of the (just 4% illuminated) Moon sitting next to Mercury soon after sunset on 13 May.

The Moon orbits around the Earth on a slightly different inclination to that which the Earth orbits around the Sun, so it is rare that the moon actually passes in front of the sun. Next month, however, the Sun, the Moon and the Earth will partially align to provide a rare and exciting partial solar eclipse, so be sure to join us next month to find out more.

International Space Station over the UK

These are the best times to catch the ISS passing over the UK in May.

The Ingenuity helicopter on Mars has not only achieved the milestone of making the first powered flight on another planet, it has also successfully completed a further two, more ambitious flights. This demonstration proves an exciting technology for faster and further-reaching exploration of the red planet.

Similarly, the scientific experiment ‘MOXIE’ or Mars OXygen In-situ resource utilisation Experiment, hosted on board the Perseverance rover and with key UK involvement, has succeeded in producing a small amount of oxygen from the carbon dioxide filled atmosphere of Mars. This paves the way for technology that can provide breathable air for future astronauts, but could also be used in the production of fuel for rockets at Mars.

Find out more about the exciting Mars mission.

Next month: More on the partial solar eclipse that takes place on 10 June, as well as information about the remarkable summer stars and constellations.

We’re saddened to hear of the recent death of Michael Collins, 90, one of the three crew members of Apollo 11, the first manned mission to land on the Moon in 1969.