Happy Dark Matter Day! Thomas Kitching, Reader in Astrophysics, gives an overview of Dark Matter and the UK's involvement in Euclid. A mission which will map the geometry of the dark Universe. 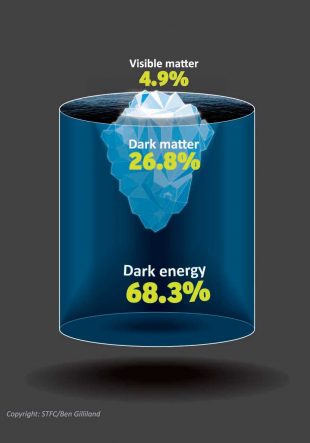 Dark matter is in fact a terrible name for the transparent, ubiquitous scaffolding of matter that comprises most of the matter in the Universe; because it’s not really dark but completely invisible. However the real problem with dark matter is that even though it's the most common form of matter that exists, nobody knows what dark matter is. Despite these facts we can still make a map of where the dark matter is using an effect called gravitational lensing: the effect where light from distant galaxies is distorted by presence of the invisible mass. This works in a similar way to how a bathroom window – made of glass that is also transparent – distorts images behind it, or the way in which we see the bottom of a swimming pool apparently ripple and wriggle because of waves in the water – which is also transparent. By measuring the distortions of galaxy images caused by the intervening dark matter we can therefore make a map of the dark matter in the Universe.

However this is a very difficult measurement to make because the change in observed shape of a galaxy caused by dark matter’s influence is very, very small. So we need the best telescopes in world in a very stable well-controlled environment; the only such place, for such a science case, is space.

In just over 3 years a new space telescope called Euclid will launch, one of whose primary objectives is to make a dark matter map of most of the observable Universe using the gravitational lensing method. Euclid will observe three-quarters of the extra-galactic sky back in time over three-quarters the age of the Universe. Over its mission it will take 277 HD TV’s worth of data every 10 minutes continuously for 6 years; resulting in an observed area of sky thousands of time larger than that observed by the Hubble Space Telescope over its entire 25 year lifetime. The final set will contain billions of galaxies.

The Euclid Consortium of scientists and engineers is a truly international endeavour consisting of over 1,500 people in 15 countries, working together towards the common goal of exploring the Universe for over 20 years from the initial conception to the final pixel of observations analysed.

The UK is involved in every part of the gravitational lensing measurements of Euclid. For example the digital camera, 50 times larger than your smartphone camera – one of the largest to be launched into space to date – is being built in the Surrey Hills at the Mullard Space Science Lab, using microchips developed in Essex at a company called e2v; and the supercomputers, thousands of times more powerful than your laptop, which will analyse the data for the tiny gravitational lensing effects, are being built in Edinburgh; and all over the UK researchers are creating new analysis methods to extract every bit of information from data.

So in a sense we live in the dark ages, cosmologically speaking, where we know for sure that we don’t really know anything at all about most of the Universe. But all this will change very soon when, by mapping where the dark matter is, we can fill in the blank bits in our knowledge, and begin to explore the amazing Universe we live in through our new spaced-based telescope Euclid.

Today (31 October 2017), the world is celebrating the historic hunt for the unseen - something that scientists refer to as dark matter. Global, regional, and local events are being planned on and around that date by institutions and individuals looking to engage the public in discussions about what we already know about dark matter and the many present as well as planned experiments seeking to solve its mysteries. Visit the Dark Matter Day website for more infotmation.