Who would have thought that preparation for Europe's ExoMars mission includes a crash course in Geology and a couple of visits to the first aider. 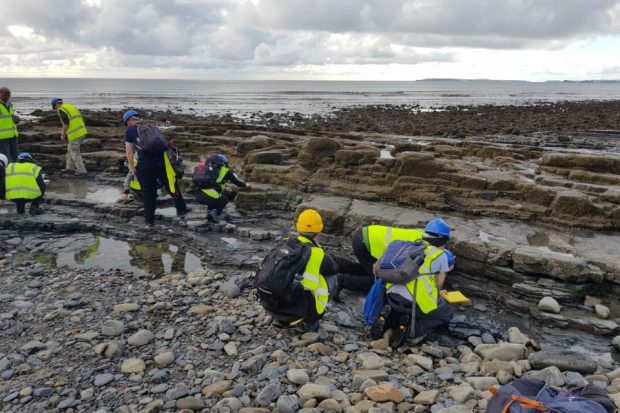 Rachel Luke, Robotic Exploration Programme Manager at the UK Space Agency, recently attended an ExoMars field trip with a group of scientists for training on sedimentology and stratigraphy, brushing up their geology knowledge ready for the ExoMars 2020 mission. Here she tells how she enjoyed her crash course in geology, despite a couple of visits to the first aider.

While it sounded great to go to South Pembrokeshire for a week, to be honest, the prospect of looking at rocks for the whole time did not fill me with excitement.

Geology was something I always used to think of as boring, a rock was just a rock right? How interesting could they be? I dropped geography in Year 9, and it wasn’t until starting at the UK Space Agency that I began to realise that geologists actually had a key part in understanding the history of various planets, especially Mars.

I arrived at the Youth Hostel we’d be staying in with some trepidation. The kit list for the trip had listed all sorts of weird and wonderful things, a hand lens, a grain size chart, and the most intriguing – a compass clinometer. The other items that I had heard of, such as waterproof trousers and sturdy walking boots I had borrowed from various members of my family. My usual outdoor gear is more suited to Glastonbury festival rather than serious walking, but I’d managed to gather everything I thought I’d need, and checked into my room which I’d be sharing with the other women on the trip.

Since my last time staying in a Youth Hostel at school, they’d improved greatly, and after tucking into a lovely dinner with multiple helpings of pudding we gathered in the classroom to find out what we’d be doing over the next 3 days. Professor Sanjeev Gupta, who was running the trip, listed the various beaches we’d be going to, including Freshwater West which is where they had filmed part of the Harry Potter series. I am a huge fan of Harry Potter, so I have to admit a little squeal of excitement got let out at that point; especially as it was the first place we’d be visiting the following day. 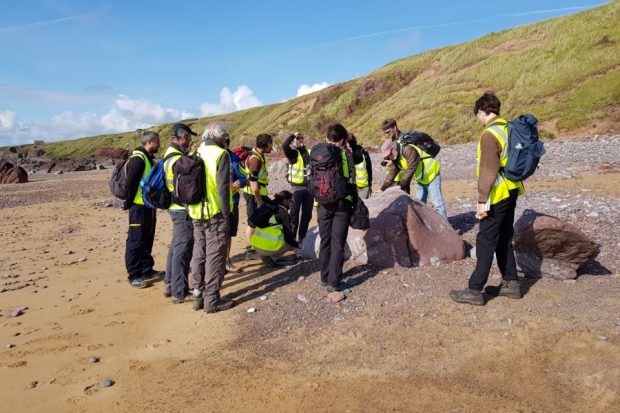 The next day dawned lovely and bright, and after a hearty breakfast we piled into the minibus and headed to the beach, donned our high-vis jackets and off we went to start learning about what the rocks can tell us.

The first thing I learnt is that rocks have a “way up” which is how you can figure out what was originally on the surface of the earth and what was underneath, as this can twist and change over time due to other forces. The layering in rocks isn’t just pretty; it also can tell you which are the youngest, and can tell tales of heavy rainfalls, and what happened in the past. I have to admit, as time went on and I began to learn more, I got the bug. It’s so interesting being able to look at a rock and get an idea of the history of the area, especially if that area was Mars.

Being pretty clumsy, I was a little nervous about climbing over rocks all week, and my nerves were justified when climbing over rocks and rock pools to get to an interesting section, I overbalanced and spectacularly fell over, dunking my head into a rock pool (lucky it was there), cutting up my hands and spraining my index finger. I felt like such a fool having to get first aid attention, however everyone was so lovely and wanted to make sure I was okay. Thankfully the weather was glorious that day, as can be seen from the photos, so I soon dried off and was able to carry on learning all about what the rocks had to say. 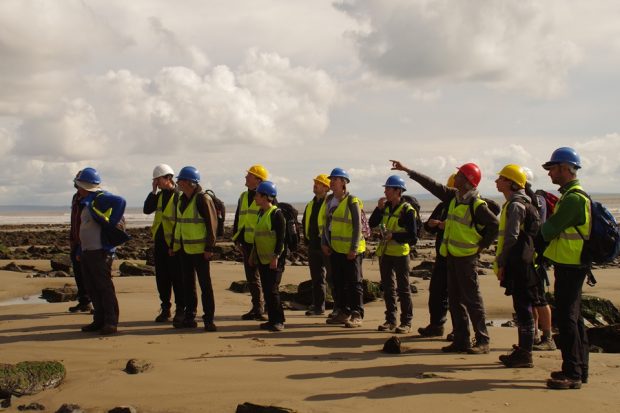 Unfortunately the next day was not as sunny as the previous one. We woke up to a bit of a wet and miserable day, and whilst driving to the site it began to truly throw it down with rain. We attempted to start the walk to the beach but as we were being buffeted against the cliffs the decision was made to go elsewhere as it was not going to be safe to walk over the slippery rocks to where we needed to go. I have to admit I did sigh in relief at this, and the alternative beach we went to was very interesting, even if we were all getting rather soggy. I was reliably informed by the scientists on the trip that the weather we were experiencing was a lot more usual for a field trip, and the sunny weather from the day before was a rarity to be enjoyed. After drying off in a pub over lunch we headed back out again, and I carried on learning all about the various things that could be seen in the rock faces. 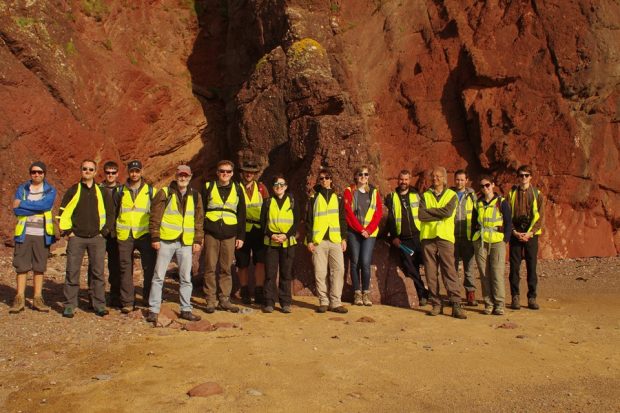 This was the final day, and although it began looking a bit dubious, the weather ended up being glorious again, thankfully. Putting on damp boots in the morning has made me vow to buy some waterproof walking boots, and I learnt a major lesson of the field trip, always take far more pairs of socks with you than you think you would need.

Once on the final beach we started to role play as if we were the ExoMars Rover, with us deducing which outcrops (get my terminology!) we should visit first to determine the maximum amount of knowledge about the area. This was a great way to put ourselves in the shoes of the rover, and to begin to figure out what the priorities should be once the rover reaches Mars. I began to use the terminology and knowledge I had learned over the week, and I have to admit, I was very excited about the things we could learn from all the various rocks.

It was a very tired, sore, but happy Rachel that got to the minibus at the end of the trip, and as much as I was looking forward to a long shower and my own bed, I had thoroughly enjoyed myself and my crash course in geology. However as a certain scientist (who shall remain nameless) was putting their bag up on the baggage shelf, their almost full bottle of water fell out and hit me on the head, leading to my second use of the first aiders and my second ice pack of the week. You will be pleased to know I am completely fine now, and my sprained finger is healing nicely, but even though I had all of the injuries of the week I would love to go on another field trip to carry on my descent into being a geology fan.