Tim Peake has recently issued the challenge to schools and other organisations to ‘Make That Call’ to him in space, using the amateur radio on board the ISS. But what is this amateur radio, and how does it work? 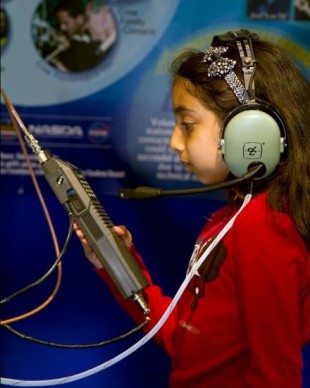 Amateur Radio is the oldest radio service in the world, existing before any global regulations existed, and is defined as a “Telecommunications Service” by the International Telecommunication Union (ITU).

The ITU is an agency of the United Nations, and is responsible for globally allocating radio frequency spectrum and satellite orbits to all the different uses of the spectrum, such as FM/Digital Radio, GPS signals, radio clock signals, wireless networking, search and rescue,… in fact everything that uses the radio part of the electromagnetic spectrum.  The ITU have allocated specific frequencies for amateur radio use, to allow anyone who wishes to learn more about the uses and techniques of radio to do so, in a non-commercial manner.

This “self-learning” ethos is fundamental to Amateur Radio and many radio amateurs have contributed to the technological development of the telecommunications industry in their careers through their interest in Amateur Radio. Did you know, for example, in 1961, only four years after the launch of the world’s first satellite, Sputnik 1, Radio Amateurs built and arranged the launch of the first private/non-governmental spacecraft – OSCAR-1.

Anyone can listen to these transmissions, just by tuning a receiver to the right frequencies, but in order to be able to transmit and talk on the radio waves, you have to have an Amateur Radio licence and be allocated a call sign, your unique identifier that allows others to know who you are. In the UK it is Ofcom, the independent regulator and competition authority for the UK communications industries that does this.

Tim received training on amateur radio as part of his overall training programme whilst in the United States and passed his exams there. He has been allocated the call sign KG5BVI by the FCC (Federal Communications Commission), the US equivalent of Ofcom. This permits Tim to use the NA1SS call sign, that of the ISS itself. However, Ofcom has also issued the callsign GB1SS for all UK astronauts who travel to the ISS and who wish to speak to schools back on earth.

The schools that are selected to talk to Tim using Amateur radio will use equipment that is provided by AMSAT-UK (the group of UK radio amateurs that have a special interest in satellite communications and the ARISS UK Operations team.) A full Amateur Radio Satellite station will be setup at the schools and will both transmit and receive radio signals to/from the ISS. A special antenna system that is capable of tracking the path of the ISS across the sky, will ensure that the radio signals are pointed towards the ISS at all times for the best transmission and reception success. 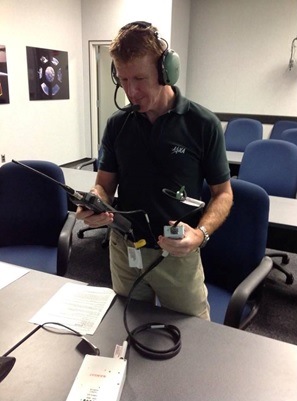 On board the ISS, there are two amateur radio stations, one in the US Operational Section of the station and one in the Russian Operational Section of the station. Tim will be using the equipment in the US section, which is located within the European Space Agency’s Columbus module. This consists a handheld Ericsson VHF Transceiver (i.e. a transmitter and receiver) for voice operations (see the picture to the right for Tim receiving his training on this equipment) and has recently been augmented by a video system (“HAMVideo”) that permits a video downlink capability from the ISS. It is possible that the schools that are selected to host a contact with Tim will also receive of him at the same time using this system.

Schools and other organisations can now apply to host one of the scheduled amateur radio links that Tim will make whilst on board the ISS.  The selected schools/organisations will host a direct link-up with the ISS during a two-day, space related STEM workshop. ARISS UK will provide and set up all necessary radio equipment (for example, low earth orbit satellite tracking antennas and radios) to establishing a fully functional, direct radio link with the ISS from their very own premises. In a ten-minute window when the ISS will be over the UK, an amateur radio contact will be established with Tim, and students will be able to ask him questions about his life and work on board the ISS.

If you would you like to get involved, there is lots more information in the application guide, which you can find along with the application form at the National STEM Centre website. Initial applications must be returned no later than Friday 24 April 2015. After this, all applications will be reviewed, and a longlist of Schools/Institutions will be invited to proceed to Stage 2 and will be notified in the week commencing 11 May 2015.  These applicants will then have until 26 June 2015 to submit their longer application.

Further details can be found in our press release.