In 1998, I was a 17-year-old with a passion for space on a visit to the Johnson Space Centre (JSC) in Houston. In amongst meeting scientists, engineers and even seeing the Apollo Moon rocks, I paid a visit to a small control room. I made some polite appreciative noises, but I didn’t really comprehend what it was, or what it represented.

This was the control room for the International Space Station (ISS), all quiet and unused; the unassuming relative to the star of the show that was next door. I was far more interested in the control room for the Space Shuttle, the spacecraft that had captured my attention throughout my childhood. But looking back now, I treasure that glimpse of the future, as that trip was the starting point of my personal journey with the ISS.

A five-bedroom house in space

The first module, known as Zayra or Dawn in Russian, roared into space from the Baikonur cosmodrome a few months after my visit to JSC, on 20 November 1998 on top of a Proton rocket. A couple of weeks later the Space Shuttle brought the second module, Unity, to meet it. The two were joined together and the International Space Station started to take shape. After another Proton rocket brought the Russian Zvezda module, and a second Space Shuttle visit, the fledgling station was ready for its first crew.

On 31 October 2000, a Russian Soyuz rocket, departing from the Baikonur Cosmodrome in Kazakhstan, carried NASA astronaut Bill Shepherd and Russian cosmonauts Sergei Krikalev and Yuri Gidzenko into space. Two days later, they arrived at their new home - the International Space Station. The crew, known as Expedition 1, stayed for four months, the first days of what is now 20 years of continuous human occupation of the ISS.

It took 13 years, over 40 flights and an astounding collaborative efforts by huge teams of people in 15 nations around the world to construct the space station in orbit. The ISS is an engineering marvel that is unlike anything else, either on or off the Earth. It is a unique scientific laboratory, with around 250 experiments taking place at any one time, allowing scientists from a wide range of disciplines the possibility to carry out research that is impossible to do anywhere else. Each module was built independently, only meeting for the first time when they were joined in orbit.

Providing a home in space to a crew of up to seven, the ISS is the size of a five-bedroom house, though it’s still slowly being extended. In 2016, NASA outfitted the ISS with the addition of BEAM, the Bigelow Expandable Activity Module, an inflatable addition to test out new technologies; and Russia are due to add a new module in April 2021. The sunlight reflecting from the eight giant solar arrays, which provide the Station with all the power it needs and stretch out to the size of a football field, make the ISS the second brightest object in the night sky (only beaten by the Moon). 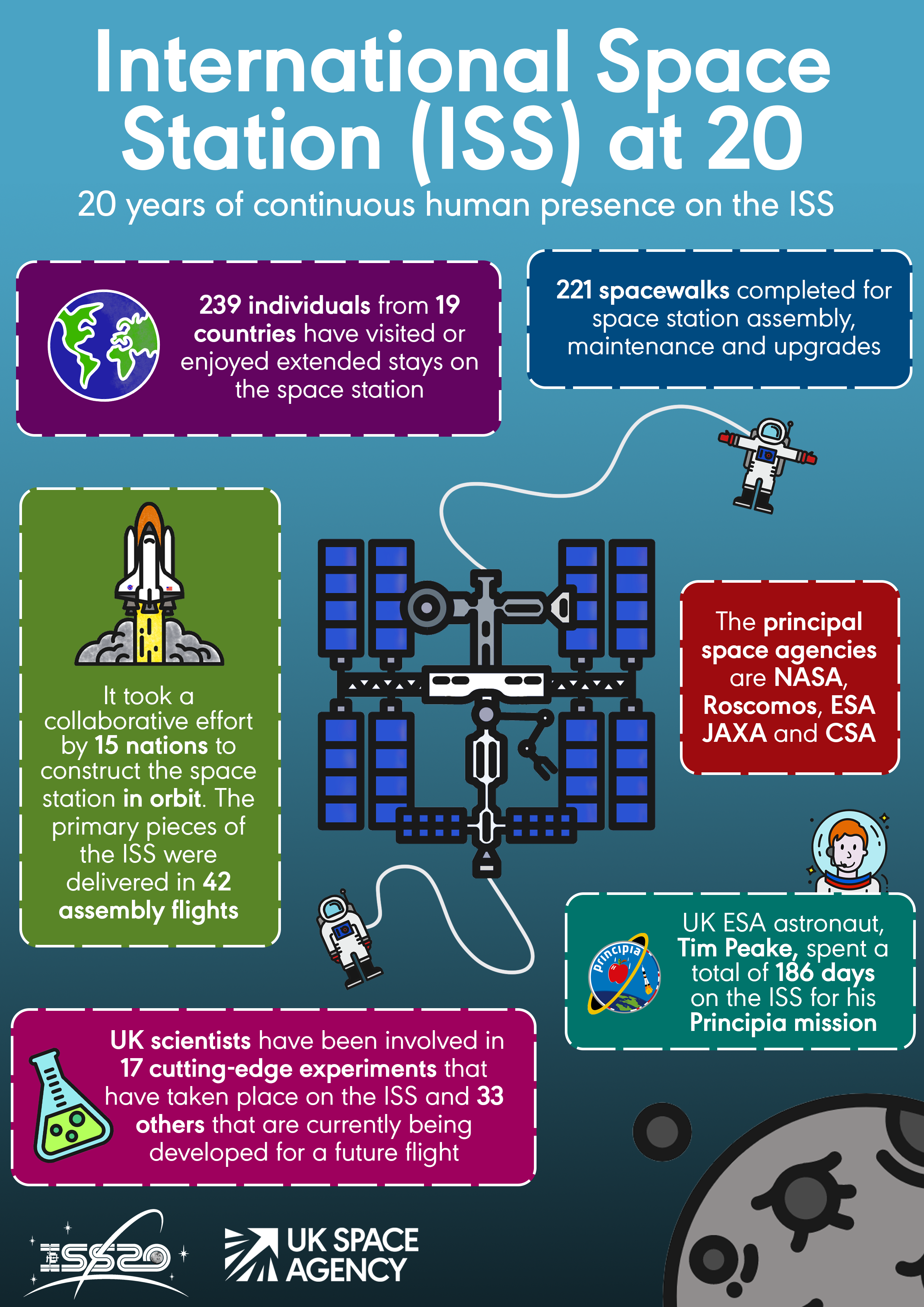 The ISS slowly grew in size from those first few modules as I worked my way through A-Levels and University. My awareness and understanding of it grew too, and I became aware that the European Space Agency’s contribution, a science laboratory called Columbus, would soon be joining the complex.

Ever since my trip to Houston, I’d dreamt of one day working in mission control, having a ringside seat in the amazing exploration adventures of human spaceflight and being part of the team that worked alongside the astronauts and engineers. Now, as a graduate working to install a satellite operations centre for some British satellites, I saw that the ISS could be a part of my future. I scoured the space jobs websites, applied for jobs, and, much to my delight and amazement, soon found myself packing up my life and moving to Germany to work at ESA’s control centre for Columbus.

I was watching in Mission Control, just outside Munich, as Atlantis carried Columbus aloft on 7 February 2008. Soon after, I was certified as a flight controller, specialising in the data and management systems of Columbus. A few years later, I realised my ultimate dream, becoming a Columbus Flight Director. I spent seven years in Munich, looking after the Columbus module and being part of the team that looked after the all-important science experiments that happened there.

Over the past 20 years, there have been over 2,700 investigations orchestrated from researchers in 108 countries—experiments from a broad range of disciplines that cannot be done on Earth.

So far, UK scientists have been involved in 17 leading-edge experiments that have taken place on the ISS, and 33 others that are currently being developed for future flight. We have sent worms into space to find new treatments for muscular conditions, and Edinburgh University have built the world's first space rock-mining devices, which use bacteria to recover minerals from rocks on the Moon and Mars.

The knowledge that scientists gain from these experiments leads to benefits for all of us in a wide range of areas. From furthering our understanding and treatment of diseases, such as cancer, Parkinson's Disease and asthma to the processes that happen in our bodies as they age, and deeper insights into fundamental scientific phenomena.

When Tim Peake was assigned to his mission in 2013, I knew that I wanted to play my part in his mission. I expected this to be on the front line in Mission Control, but when the UK Space Agency advertised for someone to manage the education programme, I found I had other ideas! I was fortunate and landed the job. I waved goodbye to Mission Control (and left a large part of my heart there), and again packed up my belongings, this time moving to Swindon.

Astronauts, and their adventures in the black void above us, are an endless source of fascination and inspiration to many people all around the world. For me, it was the stories of the Apollo missions, and the early days of human spaceflight, that captured my imagination. For young people today, it is the pictures and videos of life on board the ISS that are ubiquitous in the media. My new job had one simple objective at its heart: harness the wonder and excitement that would undoubtedly be stirred up by Tim’s six-month stay on the International Space Station, and use it to open children’s eyes to the many possibilities that science and space can offer.

Thanks to the efforts of our partners on over 30 projects, more than two million children across a third of UK schools engaged in activities that highlighted the excitement and importance of STEM subjects in their everyday lives. Five years on, many of these young people are now starting careers in the space sector.

The UK in space

The technology developed and used on the ISS isn’t just useful for keeping the astronauts alive and the science experiments running. Designing for humans in space, with the power and mass constraints, forces us to look at problems in a different light. The solutions that are found to keep things working 250 miles up in space often bring improvements to technology that is used on Earth.

A UK-designed 3D metal printer will soon be heading to the ISS, and the resulting technology improvements from the project are already improving the terrestrial processes. The UK’s contributions to the ISS also build on our established strengths in the space sector, particularly in telecommunications.

Early next year, the UK-built COLKa communications terminal will be installed. This is the first significant UK industrial contribution to the Station and will bring the science data return from the Columbus module into the modern era. At the moment, the vast data dumps from some experiments are still being couriered from the Space Station to Earth on hard disks!

Astronauts are lab technicians, the scientists in charge are based here on Earth. The COLKa terminal will allow that data from the experiments to be beamed down to those scientists – a significant upgrade to the research that takes place.

A space station around the Moon

The ISS is also a vital testing ground that is needed as ESA, alongside NASA and other agencies, look to send humans beyond Low Earth Orbit, back to the Moon and one day to Mars. The next stepping stone, the Lunar Gateway - the new space station that will orbit the Moon - is being built, with the UK industry and academia involvement.

Deep space is hard to reach, expensive, and comes with the added challenge of being outside the protection of the Earth’s magnetic field, meaning anyone who visits will be subject to much larger doses of radiation. For our success in this upcoming mission, it is vital that we have the ability to develop and test new technologies and techniques in the comparative safety that is offered by the ISS in low orbit.

Over the last 20 years, the crews who have lived and worked on the ISS, together with the many thousands of people all around the world who have designed and built it, keep it running, carry out experiments, maintain crew health, share knowledge and imagery, among many more jobs, have ensured that the investments of the ISS provide benefits for humanity back on Earth.

So tonight, why not set your alarm early, wrap up warm and join me as I step onto my lawn at 4:13am to watch the ISS for the two minutes it's visible as it passes over the UK? I'll be waving at the current residents - Kate Rubins, Sergey Ryzhikov and Sergy Kud-Sverchkov - who form Expedition 64, contemplating what the next 20 years of human space flight might hold for us all.

Libby is the Human Exploration Programme Manager at the UK Space Agency.