We teamed up with LEGO Master Builders to build a model of the Soyuz Capsule – a replica of the one Tim Peake will be using in December.

Want to sit in it? You have until March 2016 to visit the Science Museum in London and see it for yourself!

The LEGO build is modelled on the Russian space craft which transports supplies to the International Space Station and is currently the only way for astronauts to travel to space. It has room for 3 people to ride in it.

There is always at least one Soyuz attached to the ISS at all times, in case of emergencies.

It is split into 2 parts; the Soyuz capsule and the Soyuz Rocket. The capsule sits on top of the rocket and is split again into 3 ‘modules’.

The Soyuz launches from Kazakhstan, south of Russia. After launch, the spacecraft separates and the rocket returns to Earth, with the capsule only taking 9 minutes to reach space and 6 hours to reach the space station.

On the return to Earth the Soyuz drops through Earth’s atmosphere, slowing it down. The Soyuz will then use parachutes to slow down further and then fire small rocket engines to slow down closer to the ground. It lands back in Kazakhstan, nearly 4 hours after leaving the space station.

Tim’s mission to the International Space Station, called ‘Principia’, will use the unique environment of space to run experiments as well as try out new 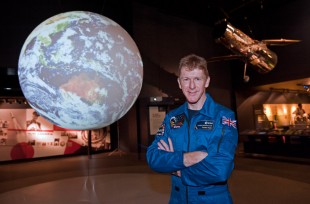 technologies for future human exploration missions. Tim will be the first British ESA astronaut to visit the Space Station where he will spend five months as part of the international crew.