I recently had the opportunity to join the University of Brighton, helping them carry out an experiment on a parabolic flight. 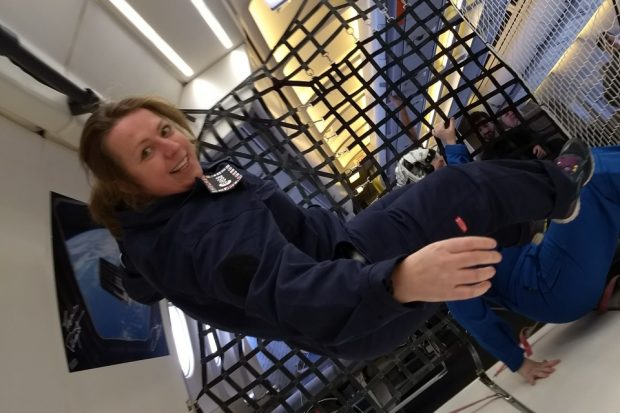 I joined Professor Marco Marengo and his team, who are researching new designs of heat pipes, which are designed to transfer thermal energy from one solid surface to another. They use a liquid inside a tube, and through a combination of evaporation and condensation allow heat to be transferred very efficiently between the two surfaces. Both on Earth and in space, they are used in cooling electronic devices, such as fuel cells and batteries.

Marco and his team, using funding from The Engineering and Physical Sciences Research Council (EPSRC), have been studying how heat pipes work in space.

Their new technology, called a pulsating heat pipes, could not only be more cheaply produced than traditional heat pipes, but it also has the potential to perform better in the absence of gravity than on ground, making the technology ideal for space applications. In order to validate that the designs really do work in space, the team have been testing their designs for short periods in microgravity on a series of parabolic flights. This has allowed them to refine their designs and technology and the concept is now ready for a larger test when it is demonstrated on the ISS next year. After that, the new designs will start to be used on satellites. 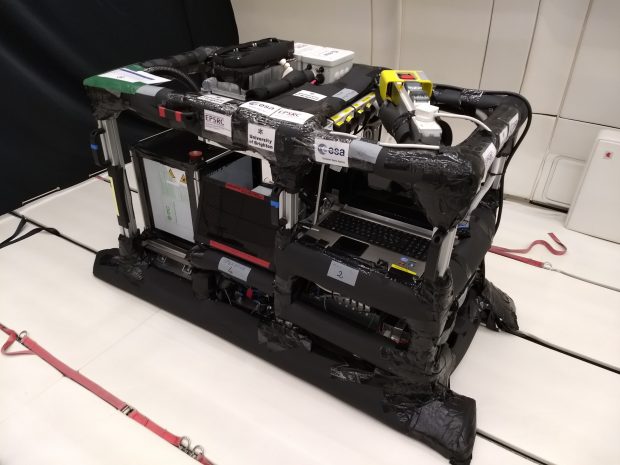 As the UK Space Agency’s Human Spaceflight and Microgravity Programme Manager, I work with all the UK scientists who carry out research on ESA’s microgravity platforms. The most obvious and famous of these is the International Space Station, which is a scientific laboratory that is in orbit, or permanent free-fall, around the Earth. By being in free fall, the ISS and all the objects in it no longer feel the effects of gravity. Scientists can use this environment and design experiments that can further our understanding of how things work without it - which will help us understand better what gravity does.

The ISS, though, isn’t the only place such science can be done. On Earth, we can create the same conditions for a short amount of time, through drop towers, sub-orbital flights, or parabolic flights. 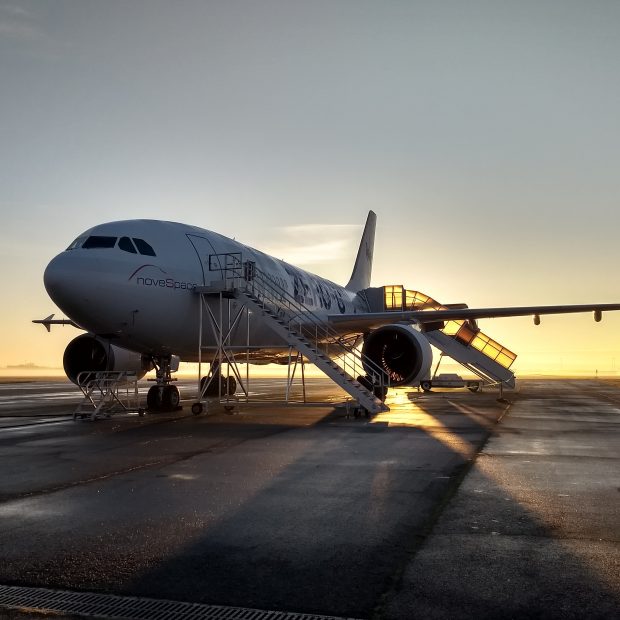 When you throw a stone into a pond, or kick a ball into the air, the objects are in free fall, subject only to gravity and air resistance. Parabolic flights work on the same principle. Three highly skilled pilots fly a specially kitted out A310 aircraft in a series of parabolas. From level flight, they point the nose up and put the engines on full thrust - effectively the ‘kick’ into the parabola, during which time we experience a hyper-gravity phase, feeling about twice as heavy as we do on Earth. After about 20 seconds, the pilots then ‘inject’ the plane into the free-fall portion of the parabola. They control the aircraft’s wings and angle to remove all forces, only applying a tiny bit of thrust from the engines to counter the air-resistance. This puts the aircraft, and everything and everyone into free-fall - moving through the air subject only to gravity, just like a spacecraft in orbit around the Earth. We continue to travel up, over the top of the parabola and then back down again, giving 22 seconds of weightlessness. As we are plummeting nose first towards the Earth, the pilots re-engage the engine thrust and pull the plane back to level flight. During the pull up, we experience a period of hyper gravity, peaking at 1.8g, nearly twice the force we usually feel on Earth, before we return to a normal cruise. The pilots repeat this manoeuvre 30 times during the course of the flight, giving the experimenters about 10 minutes of microgravity in total. 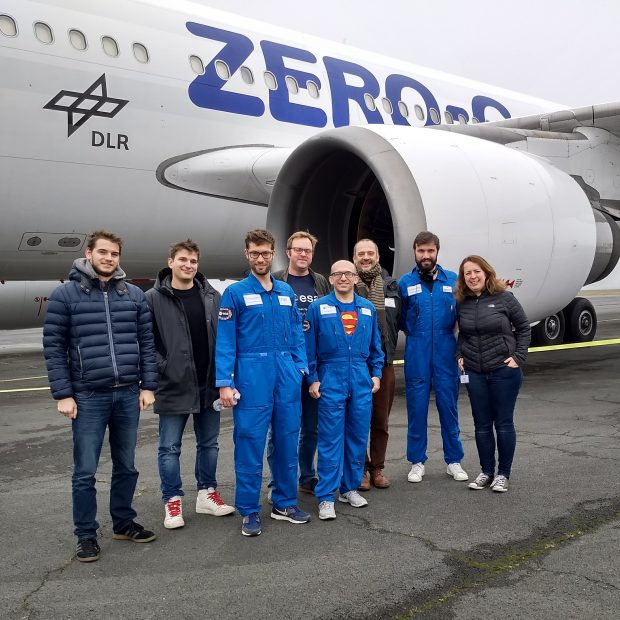 Each parabolic flight campaign consists of three flights, and I was part of a team on the second of these flights, taking the role of operator number 3. My job was to control the high speed camera, which was capturing the behaviour of the heat pipe. The camera was started automatically before each parabola, and I was to ensure that the recording started, continued through the parabola, and then, after the end of the second hyper-gravity phase, stop the recording.

Each day was an early start - teams have to be at the airport hangar by 7.45, ready for a 9am departure. After a brief weather delay, we got all clear to fly and lined up to see the doctor to be injected with our anti-nausea medication - a vital part of any parabolic flight. We got on the plane, into our seats and listened to the safety briefing. Then all the lights went out.

After a few minutes the pilots informed us there was a technical issue and they would try to restart the engines. All was good for about 10 seconds before suddenly everything went dead again. It was clear there was a problem, and sure enough, we were soon all asked to head back to the buildings and await further news.

We were soon told by the technicians that there was an issue with the Auxiallary Power Unit, and they were working to fix it. We were told to get some lunch and then wait for more news. When we returned from lunch there was a great hubbub in the labs – we had a take-off slot, the plane was fixed and we had to get ready. As our anti-nausea medication would wear off with the later flight, we had to get a second injection, and then took our seats on the plane. This time everything went according to plan and we headed down the runway and then out over the Atlantic Ocean. 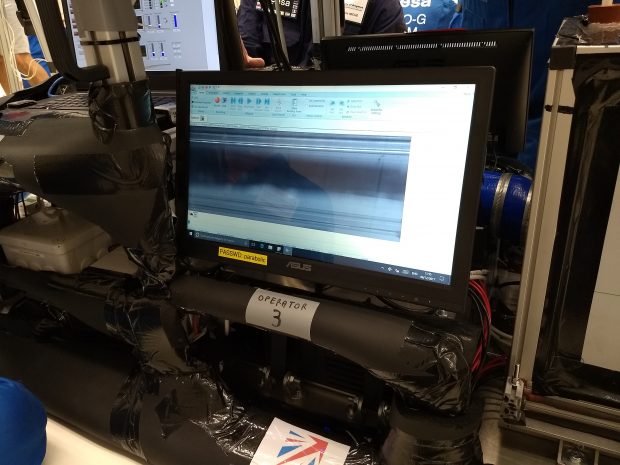 Once the plane is airborne the pilot turns off the seatbelt signs and we were able to go and power up the experiment. Everything looked OK and we got ready for the first parabola.

The pilots called out a countdown to the first parabola. 10 minutes, 5 minutes, 2… 1, 30 seconds… then ‘Pull Up’ – as the engines hit full thrust and the pilots pull the nose up.   I felt heavy as my body was pulled down, and I made very sure to keep my head still as advised, to minimise the risks of feeling, or being, sick. I felt At this point the g-forces increase to nearly twice the force of gravity. Your body is pulled. The pilots call out the angles of attack, and then ‘Injection’.

All of a sudden we were weightless and there was a collective instinctive chorus of ‘Woooahhh….’ as we felt our stomachs lift and started to float for the first time, everyone grinning from ear to ear. We couldn’t revel in this feeling though; there was science to be done.

Sadly at this point the University of Brighton Team started to realise there was a problem, - for some reason the infra-red camera was not working. The team focussed on trying to troubleshoot the problem – there was little I could do at this point but watch on and make sure that the high speed camera was doing its job, which it was.

After 22 seconds of microgravity the pilots again call ‘pull up’ as they put the engines back to full thrust and manoeuvre the plane from a nose down dive to level flight again. The microgravity ended with a very literal bump as I made contact with the floor again, and then stayed still for 20 seconds of hyper gravity before returning to level flight.

After this first ‘shake-down’ parabola (known as parabola zero) the team kept troubleshooting, realising that the power supply was likely at fault. Over the next few parabolas they worked to isolate the root cause and confirmed that indeed it was the power supply – subsequence analysis suggested that it was possible the problems that the aircraft has suffered earlier in the morning had contributed to the trip.

The experiment continued though, without the infrared imaging for this flight, still collecting valuable data about the behaviour of the heat pipe.

The team at Brighton were able to cover my camera-operator duties for a few parabolas so I had a chance to spend some time in the Free Floating area, - and have a chance to truly experiment microgravity. I’ve spent over a decade working alongside astronauts, I’ve spent years in mission control watching the crew work on the ISS and I’ve spoken to lots of colleagues who have flown on parabolic flights, so I thought I knew what weightlessness would be like. It turns out it was just like I expected, but so, so much better. It felt so natural so just be floating in the middle of cabin, able to move from one wall to another with just the push of a finger. It took some getting used to, and it was always such a shame to have to hit the floor at the end of each parabola, but it was an amazing feeling. I was soon back at the experiment again though, making sure the high speed imagery was collected.

2 hours and 30 parabolas all too soon over, and we landed back in Bordeaux with hard drives full of data and beaming smiles from the experience. Other than the issues with the infrared camera, the experiment had gone well and the University of Brighton team were happy with the data we had collected. Fortunately, the team were able to fix the power supply overnight and the following day collected a full set of data. Joining and shadowing the University of Brighton team has been a hugely useful professional experience, allowing me to experiencing first-hand the opportunities afforded to the UK science community, and it was a privilege to be a part of the science team, collecting data that will play its part in furthering technology for use on Earth and in space.

Professor Marco Marengo and his team were able have access to the parabolic flights for their experiments thanks to the UK Space Agency’s subscriptions to the European Space Agency’s Exploration programme, which we have been a part of since 2012. The experiment itself is funded by EPSRC.

You can see more of Libby’s photograph’s from the experience over on Twitter.

All UK scientists are able to apply to the European Space Agency for experiment space on a parabolic flight, as the UK subscribes to ESA’s exploration programme. For more information about this opportunity please visit the ESA website or contact Libby Jackson (libby.jackson@ukspaceagency.bis.gsi.gov.uk).

As well as the University of Brighton team, there were 10 other teams on the flight. Five were other university teams carrying out research, whilst the other five were student teams who were selected to fly their experiments as part of ESA’s ‘Fly Your Thesis’ programme, an annual opportunity for students to carry out experiments on parabolic flights. There are similar programmes for drop towers, centrifuges and sounding rockets, all of which are open to UK students.